A summary of the General Plan Update Project's community engagement activities was provided to the Board of Supervisors at a public hearing on September 1, 2020 as part of the Board's hearing materials. Click hear to view the Community Engagement Summary from the September 1, 2020 public hearing.  Many of the materials noted below which were produced as part of the County's General Plan Update Project can be accessed on this website's Document Library.

In the Fall of 2017, the County conducted a survey to provide objective, statistically reliable measures of residents’ opinions on a number of key issues to be addressed in the General Plan Update project. The results of the survey were combined with information gathered through other public input methods to help develop the 2040 General Plan. 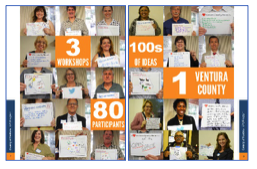 In April 2015 the County initiated a project to review the 1988 Ventura County General Plan and prepare a General Plan Update work program to consider options for updating that Plan. As part of this project, the County held three public workshops on April 22 and 23 of 2015. At each workshop, County staff and consultants briefed community members on the basics of General Plans, including their structure, content, timeline, and the reasons the County was contemplating a General Plan Update. They then described three workshop exercises to gather community input on major assets, issues, and opportunities in the county. The Work Program Options Report, published on June 26, 2015, discusses the results of these community workshops. 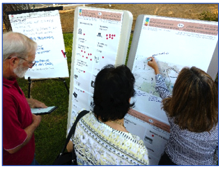 From July 13 to August 11, 2016, County staff facilitated 12 community workshops throughout the county. During the workshops, over 250 participants learned about the General Plan Update and discussed their views on the community’s major assets, current issues, and opportunities. Six of the community workshops were conducted in coordination with the County Municipal Advisory Councils while the remainder were provided to areas without a Municipal Advisory Council or similar organization.

In addition to in-person events, the General Plan Update used an online questionnaire to facilitate remote participation. The online questionnaire received 136 responses and provided background information and questions commensurate with the in-person community workshops. The results of this workshop series are described in the Assets Issues and Opportunities Summary Report, which is available on the Document Library webpage.

In addition to the 12 community workshops, from August 3 to 14, 2016, the County hosted a booth at the Ventura County Fair to inform residents about the General Plan Update project and gather input. The booth was in the Agriculture building alongside exhibits showcasing the county’s natural resources. During the Fair, County staff provided information on the General Plan Update project’s purpose, process and ways to get involved. It featured informational posters in both English and Spanish.

From July 17 to August 12, 2017, County staff held seven community meetings and four open house events to provide information on the proposed Vision and set of Guiding Principles. The County conducted open house events in coordination with the six Municipal Advisory Councils and the Piru Neighborhood Council. Open house events were facilitated as pop-up information booths with County staff present to answer questions and provide information about the General Plan Update project. The Open House events were conducted in local libraries and parks for communities that did not have a Municipal Advisory Council or neighborhood council to host a community meeting.

County staff hosted an information booth at Ventura County Government Center’s Hall of Administration from July 24th to 28th, 2017. It featured informational posters in both English and Spanish.

From March 14 to April 4, 2018, General Plan Update staff facilitated six community open house events to inform the public on findings from the evaluation of land use alternatives and prospective policy topics. Over 130 members of the public attended the community events, during which they participated in interactive activities.

Materials were available in English and Spanish at all events, and the final open house was facilitated in Spanish with translation services available in Mixtec.

As part of the review of the Preliminary Public Review Draft 2040 General Plan, the County held a set of seven community open houses beginning May 2019. These events allowed participants to learn more about the 2040 General Plan and to ask questions of County staff.

Materials were available in English and Spanish at all events, and multiple open houses offered Spanish and Mixtec translation services .

To help expand the outreach efforts of the General Plan, the County maintained a project website (www.VC2040.org) to provide information on the process including meeting dates and locations, past meeting minutes, and project documents. The County regularly updated and used the project website throughout the General Plan update process to keep community members informed and involved.

The TAC consists of County agency directors, deputy directors, and senior management staff who oversee agencies, departments, or programs, and implement policies that the General Plan will address. The TAC was established to provide data, information, and feedback at key points during the General Plan update process.

Planning Commission and Board of Supervisors Meetings, Working Sessions, and Hearings

Board of Supervisors Work Sessions

Board of Supervisors Hearings